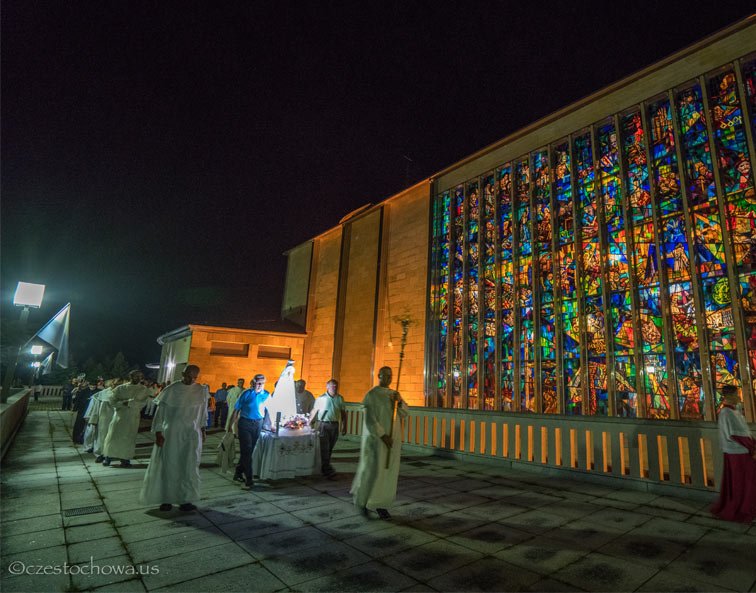 ince many years at our Shrine we celebrate the Memorial of Our Lady of the Rosary, which the liturgy commemorates on October 7th. This beautiful tradition of honoring the Blessed Virgin Mary by praying the Rosary on that day, has been started and promoted by Fr. Marian Zalecki OSPPE, who passed away many years ago. Today people of many different nationalities still visit the Blessed Mother at our Shrine to pray the Rosary. This year, our prayer had a special dimension, as we participated in the “Rosary Coast to Coast”. The goal of this prayer initiative, that took place in many Churches, homes, and other places in USA, was to defend people and their fundamental values – life, marriage, family and religious freedom, care for the healing of nations and the pursuit of holiness. Similar prayer initiatives have already taken place in Poland, Ireland, Great Britain, Australia and in many other countries.

Our prayer on October 7th began with the Holy Mass, celebrated at 6.30 PM by Fr. Krzysztof Drybka, Prior of American Czestochowa. Rosary Devotion followed after the Eucharist. The main celebrant of the Rosary Devotion was Fr. Joseph Olczak OSPPE, a former Provincial of our Order, who currently ministers at St. Joseph’s Parish in Rockville, CT.  During the devotion the faithful said all four parts of the Rosary, by praying in different languages, such as: in Polish, English, Spanish, French, Italian, Vietnamese, Filipino, German, Latin and in other languages. The whole congregation prayed in the Main Church, in front of the Icon of Our Lady of Czestochowa and the Fatima Statue, as well as during the procession to the Rosary Garden and around the Shrine.

During the devotion the faithful said all four parts of the Rosary, by praying in different languages, such as: in Polish, English, Spanish, French, Italian, Vietnamese, Filipino, German, Latin and in other languages.