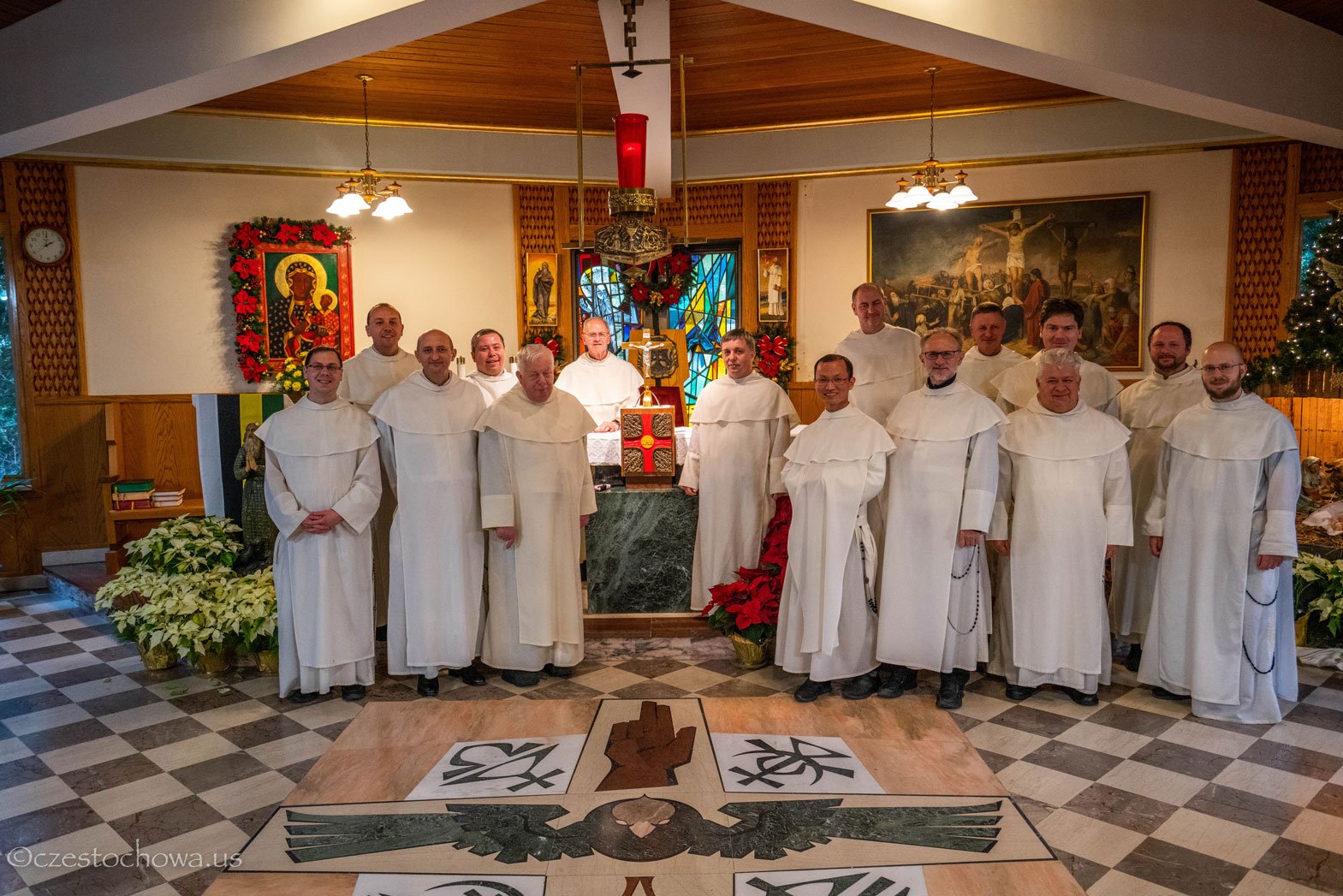 Pawełki (from Polish) – is a specific word used to describe the weekly celebrations of Pauline Fathers and Brothers (OSPPE)- dedicating their honor and respect to their patron; St. Paul the First Hermit. This year despite the pandemic and restrictions, Pauline Fathers in Doylestown, PA celebrated Pawełki from January 8th to January 17th. The celebration in respect to St. Paul the First Hermit began with thoughtful preparations:  each detail, mass, prayer, penance, spreading of Marian devotion and celebration of the sacrament of penance and reconciliation- played an important role for each Father and Brother in the Shrine of Our Lady of Czestochowa in Doylestown PA. 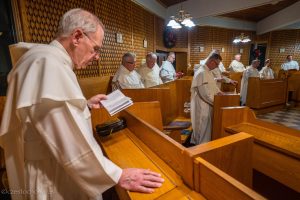 Upon entering the lower level of Our Lady of Czestochowa Shrine, pilgrims are able to see (past the confessionals, walking toward Our Lady of Nazareth) — glass doors on your left hand’s side. This is where the Pauline Fathers motto and Order’s patron is – St. Paul the First Hermit.

Pilgrims are able to not only see the beautifully painted St. Paul the First Hermit, but also look at the mural representing the history of Jasna Gora (Poland).

What most of the pilgrims do not is that it is also a secret spot to pray to St. Jude and St. Peregrine.

St. Jude the Apostle –  patron of the impossible things and Armenia- mural located on the left).

St. Peregrine Laziosi- patron of those battling cancer and illnesses – mural located on the right).

There are votive candles along the wall that can be lit if one wishes to do so upon giving donation and spending a moment on prayer.

When you look behind you at the doors one is able to recognize a decal of St. Eusebius (the founder of the OSPPE) and St. Paul the First Hermit. 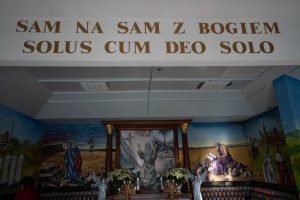 A day of fasting and recollections in Pauline Order – Fr. Sebastian Hanks

On this day all Pauline brothers and fathers also have a day of fasting and recollection. It was meant to remind Pauline brothers/fathers about their motto, devotion, contemplate on the word of God and think about the life that St. Paul the First Hermit led. Each brother and Pauline father had a chance to take notes, ask questions or contemplate on the words spoken to them after the conference. There was time for private prayer as well.

In conclusion Fr. Sebastian reminded Pauline fathers and brothers that: “a true [hermit] is the one who follows his heart, is devoted to God and Mary, helps others and silently follow in the footsteps of Jesus by being faithful to Him”.

Blessed Eusebius of Esztergom – Founder of the Pauline Order

Blessed Eusebius of Esztergom- was born around the year 1200 in Esztergom in Hungary. He was well known in the Hungarian family and was very religious from the youngest ages which we can read about in the book written by Gregory Gyöngyösi, “The life of the hermit brothers of I Saint Paul the Hermit (Vitae fratrum Eremitarum Ordinis Sancti Pauli Primi Eremitae, 1496).

Why is Blessed Eusebius important for the Pauline’s Order?

In 1246, Eusebius received permission from the bishop (Stephen I Bancsa) to become a hermit. Eusebius settled in the cave in the north of Pilisszanto and placed a large wooden cross in front of the entrance of his cave – where he prayed and meditated. One night during his prayer Eusebius saw that the whole Pilis Mountains (which were located in deep dark forest) – had tiny flames coming toward him and they joined near his cross forming a huge flame. Surprised Eusebius heard the following words coming from the cross: “Eusebius, [you have] summoned all the hermits and found a monastic community. The love present[ed] in each [one of you] will be a bond that will unite you and enable each one of you to be of a loving service [to God]. After these words Eusebius decided to found the first Hungarian order in 1250 which later became known as the Order of Saint Paul the First Hermit. In 1262 Eusebius went to Rome with his companions to ask Pope Urban IV for his permission and approval for founding his own order (he has support of Thomas Aquinas and Stephen I Bancsa). The pope at first refused to grant Eusebius his permission because of the financial struggles but decided to ask Paul Balog (Bishop of Veszprem – Hungary) to examine the monasteries. Later on during Eusebius’s life 16 monasteries were of his order. Eusebius served 20 years as a provincial.  During his last moments of life- Eusebius gathered around his companions whom he was able to bless before calmly dying on January 20, 1270. 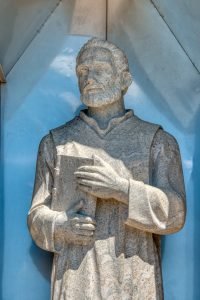 Complete silence in the church. The faithful praying and anxiously awaiting the beginning of the Mass. In the background the organist quietly plays, preparing the faithful slowly for the beginning of the mass. Suddenly, to your left the door opens, and all of the Pauline brothers and fathers, clothed in beautiful golden-white chasubles walk in silence, one by one, some smiling, others walking ahead – remaining focused on the image of Our Lady of Czestochowa in front them.

In Pauline Order, celebrating the Novena to St. Paul the Hermit during the entire week, is not only meant to focus on the life of St. Paul the First Hermit, the motto which the Pauline brothers and fathers follow, but also a moment of contemplation, prayers and devotion to God and Mary.

Being able to witness this specific moment, I was able to see how each brother had a specific function during the mass. One was responsible for assisting the Pauline Fathers by providing the missal or opening the Novena booklet for main celebrant of the mass – Fr. Tadeusz Lizinczyk. Another brother’s function was to make sure each brother/father has a photo taken during the renewal of the religious vows. And few other brothers were responsible for the smoothness of the sermon, as well as, transition between mass, prayers and Eucharist. Sitting back, one could tell how emotional some brothers and fathers were during the renewal of their religious vows, each one of them had a specific function in the Pauline Order – administrative duties, altar duties, reading intentions, prayer requests, confessions, but most importantly helping others, being of service and educating the faithful about God’s and Mary’s love toward us. Before the Eucharist each father was able to step to the altar, facing Mary and share the special moment of prayer before turning to the faithful and giving us from a distance a sign of peace. It was an emotional moment seeing every brother and father bless us, smiling through their tears as they were embracing the moment of unity among each other, but also among the faithful that came to not only support the fathers/brothers, but also celebrate this special moment with them during the Mass.

At the end as the faithful received their Communion and finished praying, Fr. Tadeusz Lizinczyk reminded everyone about this special day – thanking Mary the Patroness of the Pauline Order for her protection over them for so many years. Father had also asked Mary to protect and bless the everyone that has gathered at the Mass to share this special moment with the Pauline Order at Doylestown, PA. The Mass has ended with a beautiful singing of the choir led by Mr. Pawel Raczkowski. 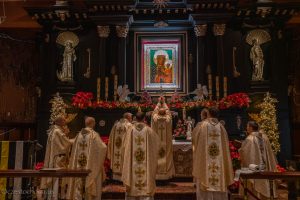 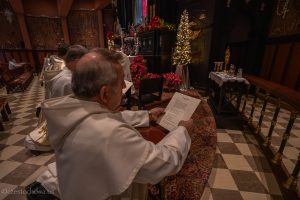 One of the most important recognizable symbols for Pauline Brothers and Fathers is the coat of arms. One is able to see a date palm- which represents St. Paul the First Hermit’s way of life – he made his clothes from the date’s leaves and fed on the fruits from the tree. A raven with a loaf of bread in its beak- brought daily half the bread to Paul every day during his 97 years of life in the desert (from age of 16 to age of 113). The two lions are symbolic for having dug a grave for St. Paul, where he was buried by St. Anthony upon finding him lying in the desert. St. Anthony upon finding his best friend dead in the desert decided to clothe him in a tunic along the two lions who dug a grave for St. Paul. 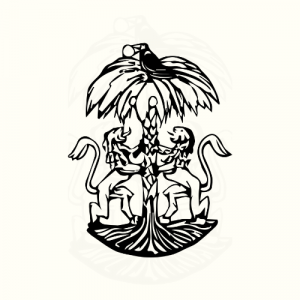 St. Paul of Thebes – commonly known as St. Paul The First Hermit is the first Christian hermit (226-341 c.) who after being persecuted by Decius and Valerianus (AD 250) for his faith fled to Egypt and decided to live alone in the desert. A raven brought half a loaf of bread to St. Paul daily, he ate dates and made his clothes from date tree leaves. Two lions dug his grave once he passed away and was found by St. Anthony who covered his body with tunic before St. Paul was buried in the grave. 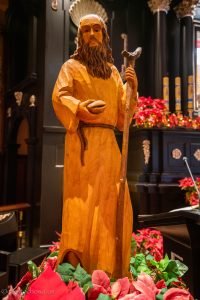 Flag of the Order: colors & meaning

Green: St. Paul made clothes from the leaves of the date palm, and fed on its fruits

Yellow: represents the sand in the Egyptian desert

Black: symbolic for the raven that brought half a loaf of bread to St. Paul

White: represents the bread that was brought to St. Paul daily 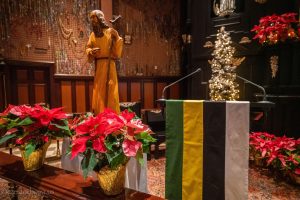 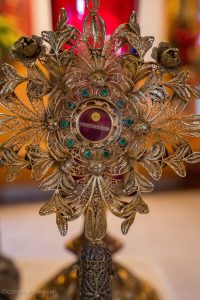 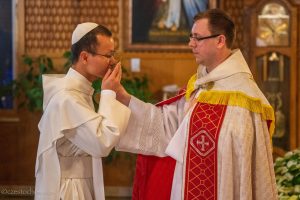 Novena to St. Paul the First Hermit at American Czestochowa