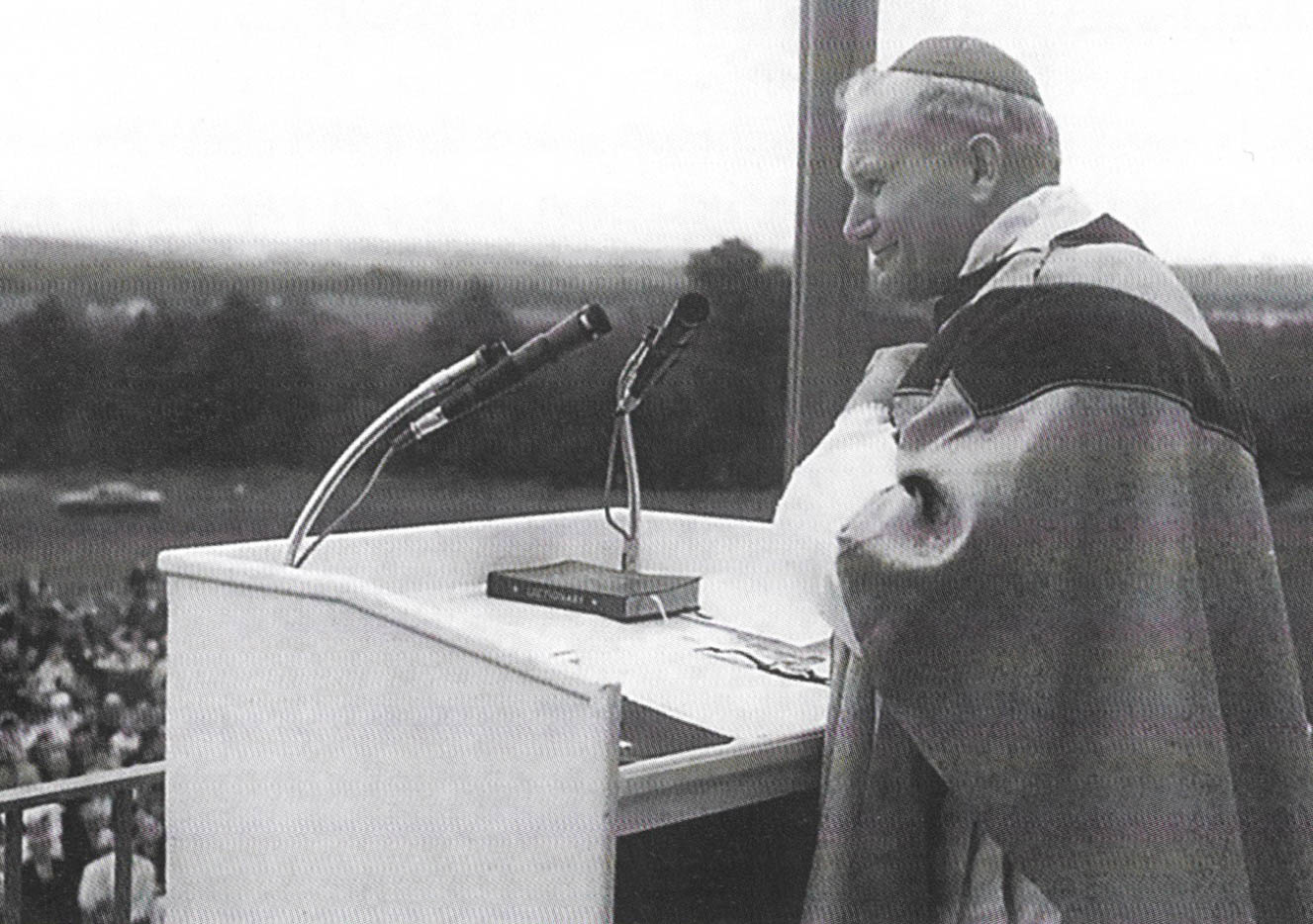 On May 18, 2020. we will be celebrating a hundredth anniversary of the birth of Karol Wojtyla, who later became Pope John Paul II. On this occasion, we would like to share a memoir of his two visits to the American Czestochowa, which he made as a Cardinal.

Cardinal Karol Wojtyla traveled a lot during his life. Visiting many places on the world map, he also visited the American Czestochowa – the Shrine of Our Lady of Czestochowa in Doylestown, in 1969 and 1976.

On August 28, 1969, he flew to Canada, where he spent three weeks, and then, invited by the Polish community in Pittsburgh, Pennsylvania, and supported by Cardinal John Wright, he arrived in the United States.

His visit to Canada was an official one. Cardinal Karol Wojtyla represented the Polish Bishops’ Conference there. The two-week stay in the United States was private. Despite this, the visit’s schedule was quite tight. The cardinal often used different means of transportation, traveling thousands of miles to be able to participate in numerous religious ceremonies and Polish-American meetings, in places such as Cleveland, Hartford, Pittsburgh, Chicago, Detroit, Boston, Doylestown, and New York. A visit to the Shrine of the Blessed Virgin Mary at American Czestochowa was a great and pleasant surprise for the guests from Poland. In the guest book, Cardinal Wojtyla left such an entry: “Being deeply moved on the day when together with Cardinal Krol, Archbishop of Philadelphia, we have celebrated the Holy Sacrifice of Mass at American Czestochowa.” Cardinal John Krol of Philadelphia received his guest sincerely and warmly.

The second stay at our Shrine took place from August 1-8, 1976. Cardinal Wojtyla participated in the Eucharistic Congress in Philadelphia as the head of the eighteen-member delegation of the Polish Episcopate, the most numerous delegation among the Bishops’ Conference from outside of US.

The stay of Cardinal Wojtyla is recalled years later by the Pauline Fathers who ministered at that time at American Czestochowa.

Father Sebastian Hanks began his religious formation as a novice in 1969. He recalls that the weather that year in September, during the visit of Cardinal Wojtyla to our Shrine, has been very hot. Despite this, nearly 200 priests and over 22,000 pilgrims have participated in the Holy Mass celebrated by the Cardinal.

Father Sebastian recalls that the cardinal traveled a lot at that time and returned to the monastery only in the evenings.

One of these evenings an interesting situation has occurred. Father Sebastian mentioned: “We were novices and we were watching television in the recreation room when someone knocked on the door and all of a sudden Cardinal Wojtyla came in. He was wearing shorts and a t-shirt. He said to us in English: “I would like a pizza”. We replied that we have no money. Wojtyla left and came back with a fifty-dollar bill asking if we can go and get a pizza. So, we went and ordered a pizza and ate it with him talking. That’s how we spent the whole evening with Wojtyla. “

The arrival of Cardinal Wojtyla was a big surprise for Father Sebastian because nobody had told them about the arrival of the guest from behind the iron curtain.

The second witness of the visits of Cardinal Wojtyla to American Czestochowa is Father Edward Volz, currently ministering at the Pauline Monastery in Kittanning, Pennsylvania.

From the story of Father Edward, we learn that Cardinal Karol Wojtyla spoke English fluently. He was extremely intelligent, which made learning languages easy for him, he was able to communicate even in Chinese. In addition, Cardinal Wojtyla had lived a holy life. He never read his homily, but he always preached it without using notes – said, Father Edward.

Father Edward served as the cardinal’s driver during his many trips to the United States. One day he was supposed to take him to the airport and he was very worried because it was late and Wojtyla has been praying for a long time in the chapel. “We must go now”, urged Father Edward, to which Wojtyla replied: “Oh, you worry too much.” When they later arrived at the airport, it turned out that the plane was delayed, which the Cardinal summed up with a short comment: “I told you”.

Another time, a huge cake was made for the Cardinal, on top of which a model of the Krakow’s Wawel Cathedral was placed. The model was so accurate that one could even open the door and see the altar inside. Wojtyla was so impressed with it, that he asked to send him the model to Poland.

A family with a little daughter dressed in traditional Polish clothing was picking up Cardinal from the airport. During the whole journey back to the Shrine, Cardinal Wojtyla kept the girl on his lap and sang to her.

Father Edward mentions the openness of Cardinal Karol Wojtyla in regard to every person: “With every person that he talked to, he talked really sincerely. He had time for everyone. He wanted to be sure that after talking to him, everyone would leave healed, and would feel important. He was a real priest, with a real priestly heart and soul. He was never a “bishop” or a “cardinal”, he was always just a priest.”

Finally, it is worth mentioning that Father Edward has also visited Wojtyla after his election to the Papacy. The Pope remembered American Czestochowa well and always asked how our Shrine was doing.

In his sermon delivered at our Shrine in September 1969, Cardinal Karol Wojtyla expressed his joy at coming to American Czestochowa and his encounter with the Mother of God. He also emphasized the need for Poles to be close to Mary, wherever they live in the world. Below are some excerpts from this homily given at our Shrine:

“My fellow countrymen, I would like to express first of all my great joy that comes from our meeting in Czestochowa. Certainly not in this Czestochowa at Jasna Gora in Poland, but at American Czestochowa.”

“It is a special joy for me that we can meet here in front of the image of Our Lady of Czestochowa, the same as in Jasna Gora, with your shepherd, Cardinal John Krol.”

“However, a special source of this joy comes from the fact that we all meet in front of the face of Our Lady of Czestochowa.”

“And we would like to keep these two Czestochowas permanently in close communication. Constantly keep one, one as the Shrine of the history of salvation among God’s people on the Polish soil and one among Poles outside of Poland.”

Photos: from the Archives of the Pauline Monastery in Doylestown